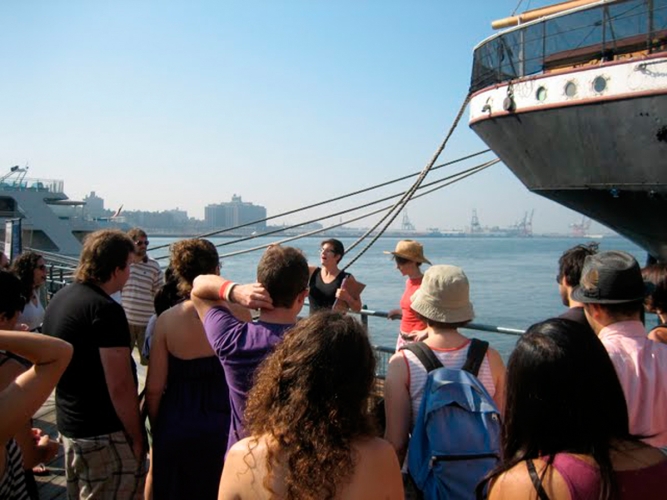 From Solid to Liquid: Bus Tour

As part of the Flux Factory's summer series, Going Places, Doing Stuff 2, the Solid to Liquid bus tour headed out of New York on a veggie oil school bus to explore connections between local sites and a newly navigable Northwest Passage. The tour connected local sites to the resource and land claims currently underway in the melting passage. We followed its metaphorical path through the multi-modal transport zone surrounding the high-volume Port of NJ.

For companies and countries with oil interests, one of the most compelling aspects of the melting of the Arctic is the presence of oil and gas. The coast of NJ has long been dominated by oil and natural gas - it was the terminus of the first pipeline in the world, delivering oil from western Pennsylvania.

Beyond the highways, railways, and petroleum facilities, Kearny Marsh is an area of the Meadowlands that is not currently tidal. Surrounded to the north and south by landfills and bisected by a disused railway connecting the industrial areas of northern New Jersey to New York City, the marsh feels simultaneously lush and alien. We entered the marsh as a terrestrial analog for Devon Island, which is itself utilized by NASA and the Mars Institute as a terrestrial analog for the moon and Mars.